The Eighth annual Smoke Inn Series of Poker turned out to be another event for the ages. With new manufacturers, Ortega Cigars, Espinosa Cigars, H. Upmann & La Aurora make their SISOP Debuts and 125 players tested their skill and luck to win the coveted seat at the 2013 World Series of Poker Main Event.

After nine hours of play the second female champion was crowned! Danyelle Barron from Team Ortega came into the final table with a massive chip lead over the other competitors.

Special thanks to everyone who made this event a great success we wish Dayelle the best of luck at the Main Event, may your skill and luck take you far in Las Vegas this July. 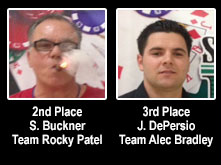