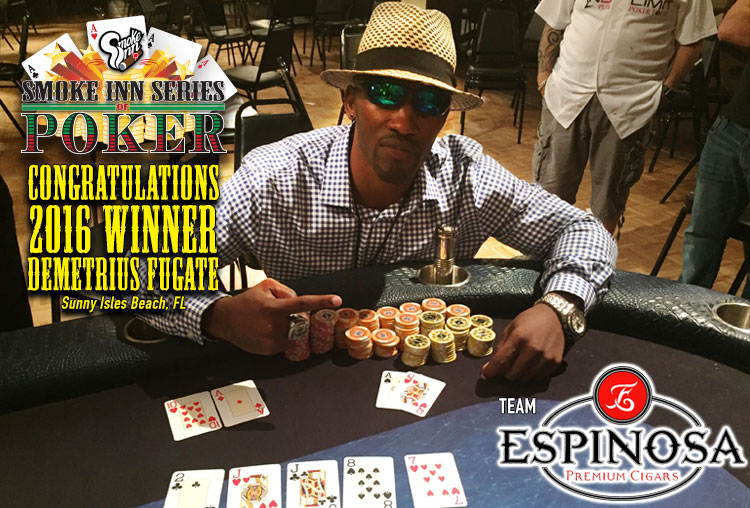 The Eleventh annual Smoke Inn Series of Poker turned out to be another great event. With new manufacturers, Moya Ruiz and Gurkha making their SISOP Debuts in a field of 130 players who tested their skill and luck to win the coveted seat at the 2016 World Series of Poker Main Event.

Demetrius obtained a monster stack early in the day and was able to maintain it thoughout the record long event. Half past the 10th hour of play Demetrius ended up heads up against Lawrence Shawe, who at this time at developed an equivelent sized stack. For approximately 20 minutes, chips shuffled back and for between the 2 heads up players. Both sitting with a seemingly strong starting hand made some pre-flop action, after the flop of 2c,Jh,Jc, Lawrence, first act, pushed all-in. Spending relatively little time in the think tank, Demetrius bravely calls. Lawrence flipped over Ad,10h and Demetrius flipped over As,Qh. With the turn and river respectively being 8s,7h Demetrius Fugate and Team Espinosa Cigars went on to win the 11th annual Smoke Inn Series of Poker! We wish Demetrius the best of luck in the 2016 World Series of Poker Main Event in Las Vegas this summer!

Special thanks to everyone who made this event another great success and we wish Demetrius the best of luck at the Main Event, may your skill and luck take you far in Las Vegas this July!

Congratulations to our 2016 SISOP Winner!